By researching & Comparing Olin’s cases we found it so appalling that she practices almost a uniformed strategy in order to damage Children and their Mom’s lives. Her Most popular tactic is “Judge Shopping” in order to set you up in the Court & get what she wants through her fellow Influenced Judges.
Olin’s Case #1:
The child who lived to tell the tale of sick minded GAL – Deborah S Olin turned 18 years old and ready to expose the real depraved GAL who put this child in torment & agony for more than 5 years………….Ms. Olin decided to place her in different foster homes, while the loving fit parents were endlessly fighting to bring her back home and at the same time the child was begging her (Olin) to do so, as a result of her actions, The minor child attempted suicide 4 times, Ran away from different Foster homes to find her way back to her loving real parents, turned into drugs,………& so much more….when you see the evidences & facts on this case, it makes you sick into your stomach, nevertheless makes you wonder, how this malicious woman got appointed on such a important position by Virginia Judges………. ?
Deborah Olin was switching Judges within minutes. We were scheduled to be in the X Judge’s Court Room, but always end up before her fellow Judge who was unfairly influenced by Olin……. So, we knew, no matter how strong our evidences are, there is no way of getting a fair verdict. Oh my God….We are ambushed in Olin’s depraved Scheme, said…………………..
Mother begged to have her daughter in the separate home, while the father trying to clear the accusations against him, Olin objected………..Mother saw her daughter in the court after a long time of separation, both wanted to hug each other.
Olin: “You only have 1 Minute to hold your daughter” while closely checking on them……"one minute is up," she said while separating the Mother who had no accusations against her from her loving daughter…….This is outrages.
Detailed & comprehensive of this story to be published soon.


Olin's Case # 2:
Deborah S. Olin proceedings & her atrocious actions In regards of Dr. Ariel King & her 5 year old daughter (Ariana-Leilani now 6) who Olin managed to unfairly take her away from the loving Mother.
Mother has not seen her daughter for over one year now.
Dr. Ariel King (Mother) is actively demanding her daughter’s (Ariana-Leilani now 6) rights to be acknowledged through UN Committee on the Rights of the Child and various other local & international organizations.

Olin's Case # 3:
In regards of delivering Minor Children's passports to the convicted Document-fraud- addicted /Criminal Father.
Tragedy Started when“Deborah S Olin” was appointed as the GAL........ on this case.
The 2 little girls are in the serious menace at this point, all because of this woman.
The convicted criminal Father who only had Supervised visitation due to his criminal acts, acquired not only unsupervised visitation, but granted with the children’s passports…….with the help of eminent Judge shopper, anti Children/ Mothers rights Guardian Ad-Litem Deborah S Olin.
Ms Olin managed the counterfeited court order which is not matching the Court Report.
The magistrate office issued arrest warrant against the Father for electronic harassments, due to the horrible emails he was sending to Mother (on most Olin was included)
On the Father’s criminal Court dates, Ms. Olin (Guardian Ad-Litem for the Children?) was there for the Father !!!!
Olin keeps Intimidating the Mother and running around to find one of her fellow Judges in order to dismiss and drop the charges against the Father…………..how bizarre is that?

Why we always end up with Olin’s unjust fellow Judges? We were scheduled to be heard in Judge…. Court Room, how did we end up in Olin’s prejudiced Judge again & again & again???????????? There is no hope of receiving a fair ruling or get out of Olin’s trap………..Said…….
(Sound fimiliar with Case #1 above?)

This case is outrages, but, it’s well documented. More to come on this case......
We are actively communicating with different organizations, in order to get to the bottom of this corruption…………………

Dear Ms. Lelia Hopper;
I’ve received this article, and sending you ……………………
This is in regards of GAL Deborah S Olin I would say one of the worst GALs in the Fairfax County and Arlington Courts.
So far, I am aware of #s outrages cases that D. Olin has totally damaged the children and Mom’s lives.
These Moms abused by the GAL Deborah Olin believe that the system failed their children and the family.
She has no mercy for the little kids and definitely hates their Moms…………..they say, even though ……………………

I start writing you the story of my excruciating experience in the desecrated Fairfax County courts “Both JD&R & Circuit” for the past 7 years and you be the Judge of all Judges please…………..the nightmare started when Deborah S. Olin was assigned on our case, She is..........
Posted by Artim at Monday, June 29, 2009 No comments: Links to this post 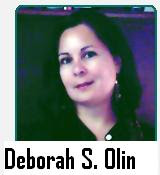 
More of her Story Below:

http://misconductinvirginiafamilycourts.blogspot.com/search/label/Deborah%20S%20Olin%20Guardian%20Ad-Litem
Posted by Artim at Monday, June 29, 2009 No comments: Links to this post