CFSA of DC Criminal, Corruption and Cover up 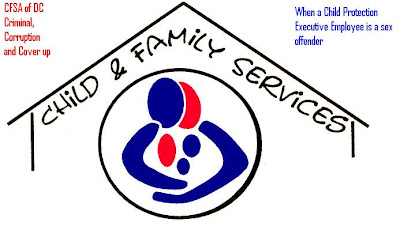 CFSA of DC Criminal, Corruption and Cover up.

When a Child Protection Executive Employee is a sex offender, likelywith minors involved, should they remain in the public's trust and continue to work, especially when they use their influence to help suspected abusers to not be detected and accountable?
This arrest occurred 2004 when Mr. Toscano was an attorney recently transferred to Child Protective Services (CFSA) from the DC Attorney General’s office.
He was charged, and through his attorney who specializes in "park arrests" with sexual activity made a deal with the Arlington County Prosecutor that the charges would be dropped after he finishes a year of supervised probation and complete a sex offender evaluation.
After the one year probation, in 2005, the charges were dropped just before his scheduled trial.
Despite this arrest and the nature of the charges, Mr. James Toscano who works alongside the Director, Dr. Roque Gerald as an Executive who sets policy for all, and an employee arrest policy that states automatic termination, he is allowed to continue working at DC Child Protection Agency (CFSA) on children’s abuse cases. In addition, he was promoted in 2008 to the General Counsel of CFSA.
A 2007 memo of the then CFSA General Counsel stated that a Probation before Judgement (PBJ) for indecent exposure is grounds for termination — but Mr. Toscano was not terminated. As explained in the letter to Mr. Wells and Dr Gerald, Mr. Toscano has helped the suspected abuser by personally interfering and providing false information in at least one case helping to cause the investigation to be improperly done. Mr. Toscano actively worked to help the alleged abuser/neglectful parent and appeared to act beholden to the abuser’s attorney (who is from an old Arlington family and knows his way around its courthouse very well — and no doubt knew about Mr. Toscano’s background). In 2009 and 2010, Roy Morris, Esq. testified before the DC City Council Chair, Tommy Wells Committee regarding this matter twice, and in neither instance was there any followup or expression of concern from any DC officials.
They act as if they know all of this already, and are intent on doing nothing about it.The problem here is too obvious, based on the documentation attached.
James Toscano and Child Protective Services are intent to hide the truth from the public.
Posted by Artim at Thursday, June 10, 2010 No comments: