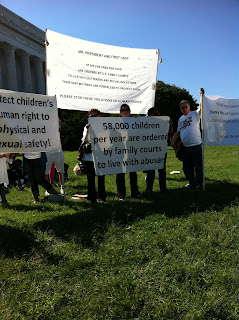 Who is Barry Goldstein? He is a lawyer, writer, speaker, and activist. He was practicing in New York for Genia Shockome in the Family Court until the Judge through the book at him for speaking the truth. Barry didn't let this faze him. If a judge through a book at him, then Barry would write a book, or at least co-write and co-edit a BIG BLUE BOOK (710 pages) with Mo Hannah, founder and director of the annual Battered Mothers Custody Conference held in Albany, NY. This book may revolutionize the Family Courts. Barry is a regular invaluable speaker and teacher at the BMCC. This book, Domestic Violence, Abuse, and Child Custody: Legal Strategies and Policy Issues, ISBN: 1-887554-76-9 goes for a whopping $139.95, but it well worth it, as 25 seasoned advocates and professionals contribute a chapter each (see 2nd article below for details).
Barry has an unusual voice, someone once described it as underwater baritone, his content is right on, as his speech is streamlined for efficiency and impact. He has a New York accent, whatever that means, and he is very amiable and helpful. Barry was recently at the October 1st and 2nd event in Washington D.C.  On the first day, he marched with the troops from the Department of Justice to the Senate buildings, where he and the top organizers, the "A Team" as we called it, because they talked with the key Senatorial Aides. On both days, Barry could be seen holding one end of the banner, while munching on apples from a thoughtful Mom who also blessed us with delicious scones... I digress a bit.
The point I am trying to make is that Barry was on the front lines of activism.  So, I am sure there is more that Attorney Barry Goldstein has done for women and children over the years, and there is still more he will do. I encourage all of you to attend the 8th BMCC on January 7, 8, and 9, 2010. The focus and title of the conference is UNITY. Barry is one of us who exemplifies this goal.
ps. Barry Goldstein's web address http://www.barrygoldstein.net
His other book is Scared To Leave, Afraid to Stay, (see web above)
Barry's email is Barryg78@aol.com
Barry's BIO - http://www.barrygoldstein.net/aboutauthor.html