When evidence emerges that a Judge is abusing his/her judicial office for his own advantage, the integrity of the judicial system becomes compromised, and the House of Representatives has the duty to investigate the matter and take the appropriate actions to end the abuse and restore confidence in the judicial system.

It is not a satisfying task to impeach a judge, yet when a judge so clearly abuses his office, as in the case of Judge Bruce D. White of Fairfax County it becomes necessary to take the appropriate action in order to restore the confidence of the American people in the judicial system. The Constitution gives the House of Representatives the power and responsibility to impeach federal judges and it is a power that Congress utilizes only in cases involving very serious allegations of misconduct. The Task Force on Judicial Impeachment, the House Judiciary Committee and the full House of Representatives should work together in a bipartisan fashion to ensure that rapid action is taken to Eradicate corruption in our judicial system.

Below are different cases, different people who were abused by Judge Bruce D. White......
We think.....It's time for this Judge to step down.
More stories to come..........

My life is currently in danger because of corrupted judge Bruce D. White!

I am an EX husband....my Experience with Judge White

I was insulted and discriminated by Judge Bruce D. White for no reason.

I have some real hard evidence against Judge Bruce D. White. said.......
Posted by Artim at Wednesday, January 20, 2010 No comments:

Email ThisBlogThis!Share to TwitterShare to FacebookShare to Pinterest
Labels: Tear down Corruptions in Virginia Judicial System

Judge Mary Waterstone is Charged with 4 felonies.
She is accused of allowing witnesses to lie..........
Do you see a similarity between Judge Waterstone's felony charges with "JUDGE BRUCE D. WHITE" of Fairfax County??????????? Shouldn't he be charged????
I have some real hard evidence against Judge Bruce D. White. said.......White's misconducts was even more apparent than Judge Waterstone. Seeing White in action on my proceeding I am convinced that Judge Bruce D. White is notorious: worse than Ex Judge Waterstone.
How about Judge Leslie Alden who allowed deceiving man to demonstrate forged Documents, in her court room....under Oath......... ????????
Judge Charged With Allowing Perjury Argues For Immunity From Prosecution
Michigan recently indicted one former judge Wayne County Circuit judge (Mary Waterstone) for allowing perjured testimony during a criminal trail..
the judge and a prosecutor knowingly allowed perjured testimony in the first trial
she allowed the jury to receive testimony she knew to be false.
It is astonishing that a judge would blame a defense lawyer for attempting to learn the truth -- a truth the prosecution had a duty to disclose and that the defendant had a constitutional right to know. It is even more astonishing that a judge would conspire with a prosecutor to conceal a violation of that right, placing a defendant at risk of being convicted on the basis of perjured testimony. For that judge to claim to be unbiased is more than astonishing; it is sickening....................
There is a huge cover up in the Judge Waterstone corruption case. Judge Waterstone has been fixing cases with prosecuters for her entire time on the bench...........
Judge Mary Waterstone, Prosecutor, and Two Inkster Cops Face Life In Prison
Detroit -- Wayne County Circuit Judge Mary Waterstone (retired), former Assistant County prosecutor Karen Plants, and Inkster (MI) cops Scott Rechtzigel and Robert McArthur were each charged with several counts of misconduct while in office in an indictment handed down on March 24. Plants, Rechtzigel, and McArthur also face multiple counts of perjury, each of which carry a maximum penalty of life in prison.
Wayne County Judge Mary Waterstone
(retired)
The charges stem from a March 2005 cocaine bust involving Alexander Aceval and Richardo Pena, both of whom are currently serving prison sentences. Plants and the two cops covered up the fact one of the prosecution's witnesses was a paid police informant. Judge Waterstone than signed an order, banning the defendant's attorneys from accessing the paid informant's phone records, which would have shown he had spoken to the officers.
SOURCE: The Detroit News
Posted by Artim at Wednesday, January 20, 2010 No comments: 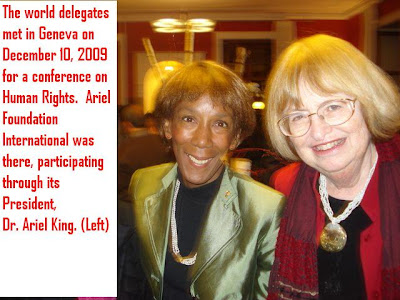 We have seen and experienced so much. We hold on to hope that one day, these human rights atrocities will never happen to another family or child again.

The recent pattern of American violations of international law are ultimately based in the corruption of the USA domestic legal system. Phony USA courts are very dangerous even for travellers and visitors to America, who can easily wind up among the USA's more than 2 million prisoners, or lose all their family's possessions to corrupt American lawyers.
All world citizens should know how the corrupt USA legal system, is a danger to every traveller, visitor, and guest worker from overseas, and to every individual who takes the risky step of entering upon American territory. Just ask the overseas families of prisoners who were put to death inside the USA, with their embassies never even being informed that they were arrested - or the many foreign people serving hugely long prison terms in America, after they were jailed on flimsy tainted "evidence" from criminal snitches.The reality is that the United States of America, which proclaims itself the "land of freedom", has the most dishonest, dangerous and crooked legal system of any developed nation. Legal corruption is covering America like a blanket.The corruption of the USA legal system is well-known, but also well-hidden, by the news services of America's corporate-owned media. The US media companies are afraid both of reprisal, and of the social revolution that would come from exposing the truth.
Here is what the US media companies know, but are afraid to tell you about American "justice".
Posted by Artim at Thursday, January 07, 2010 No comments:

HB 14 Domestic relations cases; witness refusal to answer question on ground that it may self-incriminate.
HB 39 Bigamy; person found guilty may be ordered by court to make restitution to other party of marriage.
HB 40 Disabled parent; cannot be guilty of criminal nonsupport if child is in necessitous circumstances.
HB 146 Child support; court may order continuation for child over age 18 who is attending college.
HB 165 Virginia Military Parents Equal Protection Act; stay of proceedings.
HB 216 Assault and battery against a family or household member; protective order, penalty.
HB 377 Equitable distribution; monetary award in a divorce case is enforceable in same manner as judgment.
HJ 55 Constitutional amendment; repeals 2006 referendum dealing with marriage (first reference).
SB 69 Surrogacy; permits contract to be entered into by an unmarried person, a surrogate, etc.
SB 157 Preliminary removal orders; required to specify frequency, location, and duration of visitation.
SB 161 Divorce proceedings; service requirements and waiver of notice of further proceedings.
Posted by Artim at Monday, January 04, 2010 No comments: