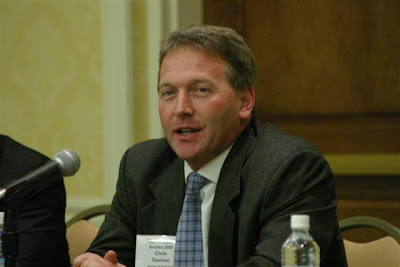 Richmond trial attorney Coleman Allen told a VCOG audience that he's practiced in both Virginia and West Virginia. He's seen good and bad judges in each state, and has concluded that both states' judicial selection processes (West Virginia elects; Virginia appoints) have merits and drawbacks.
The final panel of Access 2009 focused on judicial selection in Virginia. Moderated by George Mason University Counsel, and VCOG board member Tom Moncure, the panel looked at both the policy behind Virginia's current practice and the political reality of changing it.
Staunton delegate Chris Saxman said he liked the way Staunton area lawmakers are able to get a lot of citizen input about potential judge candidates at the trial level, though he admitted that at the appellate level, legislators are often asked to vote on people they have no personal knowledge of. He also noted that the likelihood of the General Assembly giving up its current power to interview and recommend candidates is next to nil. 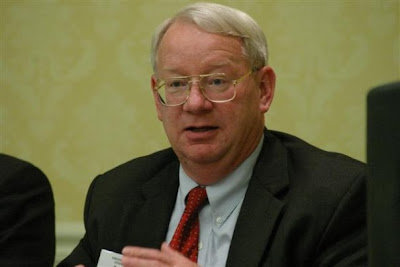 Fairfax County Clerk of Court John Frey (Left) says he wishes there was more public input in the way candidates for judgeship are selected.

Larry Roberts, currently counselor to Tim Kaine as DNC chair and previously counselor to Tim Kaine as governor, said he appreciated the power the governor has to fill certain appointments without legislative approval, but also said it wasn't be the time to put all judicial appointments into the governor's hands.
Fairfax County Clerk of Court John Frey discussed how bad judges can sometimes stay on the bench too long. He noted that an adjusted pension-accrual process may be a way to lure older lawyers with more court (and life) experience to the bench. Frey also complimented Staunton for soliciting citizen input, saying he wished there were more public input in his area of the state.
Posted by Artim at Thursday, October 15, 2009 No comments: