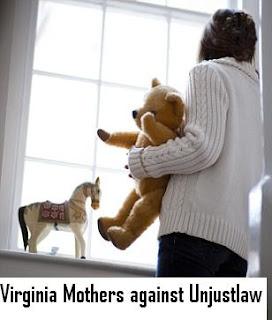 Mafia is running the legal system in Virginia........

We published this Article in "Now Public.com" & received this chilling Story, about another Abused Mother by Virginia Judicial System.

In answer to this Question:
“Should the Constitution of Virginia be amended to change the method of re-appointing state judges from confirmation by the legislature to retention election by the voters?

YES I also believe a complaint on a judge, lawyer, GAL, therapist needs immediate clean up crew and immediate review and correction of the court files where the hate crime is committed, and immediate punishment and removal of certain individuals committing organized crimes which are targeted at slowly killing a particular individual that they have targeted, and are using the legal court system to slowly kill or remove, create underlying circumstances to come about and even making that particular individual all of sudden have a criminal history where that person never had a criminal history until they walked into juvenile court.
Juvenile court is being used as a beating room against mothers who want to exercise their freedom of speech, want to write to the VA state bar, Judges judicial review committee, and when this individual writes and speaks out about it, the false charges start coming in, and they quickly take the children with no real legitimate reason to do so.
THEY SIMPLY JUST DO WHAT THEY WANT.

The Judge, GAL, Lawyers both sides, therapist cover each others backs, and are using the legal system and think that because juvenile records are closed to the public that they can fool around with made up motions, orders that never existed. It has gotten so bad that the Mafia is running the legal system.
Like my lawyer told me, I'M A LAWYER, and laugh when a letter was wrote about their criminal behaviors.
That is when they want you dead or in jail, because they don't want their secrets told, especially in writing, and they don't want other peers laughing at them behind their backs.

I am homeless, sleeping in my truck, last night my supper was out of the can, cold canned food, using a gift card from xmas to take showers at the gym, having my clothes stole out of the back of the truck, BUT HEY DCSE is going to do their part and collect for the father who just won in court, got the kids, him involved in hitting mom with truck, mom being beat up the next day, false kidnapping charge mom put in Culpeper news over 6 times and picture put in paper for most wanted with kidnapping across the front of picture, oh and mom was aired on channel 26 with kidnapping across the front of my picture-all for justice for the father to make me look like a criminal when I had full custody of the children at the time, false assault and battery charge, false capias in Albermarle county-even though I had never lived in that county-who would have known I was suppose to been arrested hauled to Albermarle jail and never see the light of day due to many other charges underlying that I did not know about, by the way during this time he kidnapped the children for real and would not let them come back and judge did nothing just laughed, false show causes, even though mom had only made $2,500 in 2007, and no income from then to now, so they imputed mom income when mom wrote letters about them trying to put criminal charges on me and showed down fathers income in court since 2003, and DCSE is withholding my only income I could possibly get and it is from Germania financial aid check I was going to use to find a room with a shower, but instead they gave to the father who makes $131,000 a year, and mom has nothing, slowly softly killing me. The fathers laughs, normal for his violent behavior because the father has GAL Michael Sharman Esq. Culpeper VA, Judge F. Somerville Culpeper VA, Judge D. Payne/Mediator (interrelated family member) Fauquier Culpeper VA, Janet Lynn Ours Esq.(interrelated family member) Prince William Co VA, Gwen Corley Winchester VA Therapist, and had my attorney Paul Morrison Esq. Fauquier VA due to him being scared of Judge D. Payne/Mediator (interrelated family member) and my attorney scared because of a case where Judge Payne hurt my sister Sheila Day.
Family on Family.
Of course they would win in court with this amount of people to help Brian Cable ex husband Robert E. Crowell ex husband. Void abinitio is what this is called, organized hate crime to create underlying outcomes to accomplish their goals.
Posted by Artim at Tuesday, September 01, 2009 2 comments:

Email ThisBlogThis!Share to TwitterShare to FacebookShare to Pinterest
Labels: It's like Mafia is running the legal system in State of Virginia
Newer Posts Older Posts Home
Subscribe to: Posts (Atom)