Why Officials of the "Commonwealth of Virginia" can robb, steal, kidnap and kill with impunity, and often do so

Officials of the "Commonwealth of Virginia" can robb, steal, kidnap and kill with impunity, and often do so.............
People often say that it is impossible that Virginia State Officials committed crimes by kidnapping my daughter, because then they would be sued.
What they don't understand is that Virginia is the only state among the 50 states which has not waived its own sovereign immunity. This means that a Virginia state official can rob, steal, kidnap or even kill you, and will not face any trouble for this, as long as he is acting in his "official capacity".
Shelby Roberts proudly displays my daughter Shamema Sloan shortly after kidnapping her
The Eleventh Amendment to the Constitution of the United States gives each individual state immunity from suit by citizens of other states.
Since then, and especially in the aftermath of the American Civil War, 49 of the 50 states have waived their own sovereign immunity. This means that, for example, if you get hit by a truck driven by an employee of New York State, you can sue the state for injuries.
However, if that truck was driven by an employee of the Commonwealth of Virginia, the Commonwealth is immune from suit, especially if the truck driver did not hit you by accident but rather ran you down with intent to kill you.
Because of being shielded from any sort of prosecution, Virginias officials know that they can commit criminal acts and therefore often do so. The court and judicial system of Virginia shields them from any sort of prosecution.
It is for this reason that Virginia officials have even been so bold as to venture into other states, kidnap children and bring them to Virginia. The parents of the kidnapped children never get them back.
If the child on her own runs away and escapes to another state, as Sara Wilson did a few weeks ago, Virginia officials then invoke the full faith and credit clause of the Constitution and the interstate compact and have the child extradited back, even though the child has no family members in Virginia. (Sara Wilson is still hiding out in Queens and has eluded capture thus far.)
When they kidnap children from other countries, as they did in the case of my daughter, Virginia officials have the best of all possible worlds, because they do not represent a country and therefore do not have to obey international law, and yet they are shielded by sovereign immunity from being prosecuted under US law as well.
Virginia even elected a known cocaine dealer, Charles Robb, to the United States Senate.
Here is a story about people who have been killed by corrupt Virginia State officials, and their families have no recourse: Virginia Psychiatric System Investigated. In it, an official of the "Commonwealth" which kidnapped my daughter from Abu Dhabi says: "We don't want the feds continuing to come into Virginia and tell us how to run our facilities''.
Sam Sloan
Posted by Artim at Friday, March 19, 2010 No comments:

Email ThisBlogThis!Share to TwitterShare to FacebookShare to Pinterest
Labels: and often do so, kidnap and kill with impunity, steal, Why Officials of the "Commonwealth of Virginia" can robb

The sickness of Arlington Virginia, and Judge Esther Wiggins. 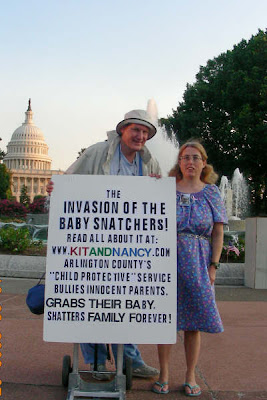 Our child was wrongly taken from us by greed, corruption and connections!

Invasion of the Child Snatchers!

My concern now is for Arlington Virginia, because I think Wiggins poses a risk to local families and children.

I think that﻿ all of us who have been done wrong by Judge Easther Wiggins;Lyle have a right to expose her, and also to publicize the names of other people, such as CPS social workers, who have used her to steal our children from us.

If she had listened to me, my daughter would not have been abandoned
by her father for all those years.

Watch the videos below:

Invasion of the Child Snatchers

The sickness of Arlington Virginia, and Esther Wiggins. Nancy's Story

The Court failed to give appropriate consideration to and grant custody of Sabrina to her relatives, specifically Christopher Slitor and her maternal grandmother, Louise Hey. It was established by a preponderance of the evidence that Christopher Slitor or Louise Hey were willing and qualified to receive and care for Sabrina; were willing to have a positive, continuous relationship with Sabrina; were committed to providing a permanent, suitable home for Sabrina; and, were willing and had the ability to protect Sabrina from abuse and neglect. Further, the preponderance of the evidence established that Louise Hey would submit herself to any terms and conditions which would promote Sabrina’s interest and welfare. The Department’s failure to follow through with its affirmative duty and to meet its burden of proof to investigate all reasonable options for placement of Sabrina with relatives, specifically the Department’s failure to explore many identified potential relative placements other than Louise Hey.