Help to save Ariana Leilani’s life. This rare blood disorder began since she started to spend many nights with her abuser father, Dr. Michael Herbert Pfeiifer 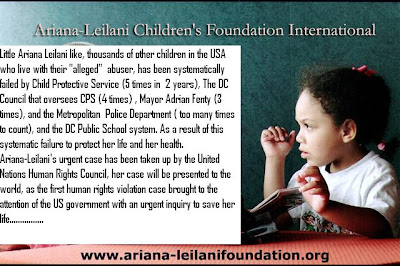 Life is sacred, God given & needs protection
For all who need protection, fear of reprisal can not stop us from speaking the truth, seeking justice and defending the most vulnerable among us!
Ariana-Leilani, 7 year old for the last 2 years has a very rare (only 1300 people world-wide) life-threatening blood disorder know as Severe Chronic Neutropenia that is not being treated with the only known medicine, GCSF,despite  please from various medical, political,  humanitarian groups.
2010-19-08 German Embassy Letter to State Department
Letters of Dr Dale and Dr. Welte R_R.
Neutropenia Lab Results
It is thought by the world expert that all the result show that it was either a  major infection (like HIV ) or "toxin induced" / drug induced. Thus far no major  infection has been found.
The drugs that can cause severe neutropenia can be used in aiding in the use, abuse, relaxation and memory loss, while destroying the normal blood
one marrow that defends against normal every day bacteria that can cause infections.
The second world expert states that if she is not treated then it is likely that she will have "toxic shock, a loss of limbs or a loss of life." Yet, the protection authorities pretend all is OK and refuse to protect her life.
This rare blood disorder has started only when she started to spend many nights with father, Dr. Michael Herbert Pfeiifer, who is a German national who works as a drug researcher/ Scientist "physician" at the Washington, DC Veterans Administration Hospital in the  Neurology Department for newly returned war veterans.
She like, thousands of other children in the USA who live with their "alleged" abuser, has been systematically failed by Child Protective Service (5 times in 2 years), The DC Council that oversees CPS (4 times) , Mayor Adrian Fenty (3 times), and the Metropolitan Police Department ( too many times to count), and the DC Public School system.

As a result of this systematic failure to protect her life and her health, the German Embassy in Washington, DC has now stepped in to ask the State Department to help to get the life-saving medicine and a full independent physical and psychological exam after a 2 year failure to have these interventions.(She is a  German & US citizen and he is a German Citizen).
In addition, Ariana-Leilani's urgent case has been taken up by the United Nations Human Rights Council, Special Rapporteur for Child Sale, Child Prostitution and Child Pornography. During the Human Rights Council from this month in Geneva, Ariana-Leilani's case will be presented to the world, as the first human rights violation case brought to the attention of the US government with an urgent inquiry to save her life in January 2010. Today, 8 September 2010, Ariana-Leilani remains very ill, is being denied the only known medicine for this rare blood disorder, and is being at the best ignored and at the worst pushed towards the only likely outcome - her death.
Today is the day to stand up for Ariana-Leilani to represent all children who are abused or killed by their parent while those who are mandated to protect  them sit by or actively help the abuser and then cover up their unimaginable human rights violations, not in Afghanistan, Ivory Coast or Iran, but in America.
Ariana-Leilani's life and struggle for medicine, safety and to be heard will be successful. She will not go gently into the night.
What can you do? Anything -Pray, spread the word, look and speak up when you see a child being abuse, share Ariana-Leilani's struggle and story on sites, social media. Demand that the USA recognize that children are human beings and thus have legally recognized human rights.
The Ariana-Leilani Children's Foundation International educates and advocates for Children's Human Rights
http://www.ariana-leilanifoundation.org/
Blessings to you all,
Dr. Ariel King
Mother, Ariana-Leilani King-Pfeiffer
Posted by Artim at Wednesday, September 08, 2010 1 comment: