Team of Corrupted Judge Esther Wiggins Lyles & Crooked Guardian ad-Litem Deborah S. Olin on the news...Again.
A federal investigation into such violations of due process rights should be next. 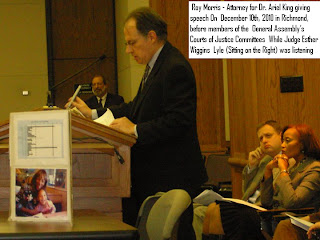 Published on:  Washington Examiner
This was not the first time that violations of defendants' due process rights in Arlington's JDR Court have been reported. In September, attorney
Roy Morris petitioned President Obama, Secretary of State Hillary Clinton and Attorney General Eric Holder to intervene on behalf of Ariel King, who not only lost custody of her then 5-year-old daughter but was barred from any future contact with her seriously ill child even though King, like O'Brien, was not an Arlington resident.`
Another anomaly: Roy Morris received two slightly different final court orders, both dated June 6, 2008, and both signed by Judge Esther Wiggins Lyles.
That same day, court transcripts show, Judge Wiggins Lyles forced a woman who had not been subpoenaed as a witness to testify on the stand without benefit of the legal representation she clearly requested. A federal investigation into such violations of due process rights should be next.
Published on
Washington Examiner (http://washingtonexaminer.com)
Home > Arlington officials ignore jurisdiction
By
Barbara Hollingsworth
Created

Arlington officials ignore jurisdiction
as the grandmother's "history of instability in housing, employment and poor judgment ... [and] a history of legal problems including check fraud that is currently under investigation by Montgomery County."
But the girl and her granddaughter were living in Stafford County at the time, not Arlington. And their "home state" as defined by the Virginia statute was Maryland, not Virginia.
Arlington social workers obliquely acknowledged their lack of jurisdiction when they took the child to Chevy Chase on Aug. 31 and used her state of Maryland "Healthy Smiles" Medicaid card and her former Bethesda address to get the girl's teeth cleaned, X-rays taken and two small cavities filled. But jurisdiction wasn't the only legal requirement Arlington decided to ignore.
In a five-page rebuttal filed with the Juvenile and Domestic Relations Court, Delores Heffernan- O'Brien testified that she had never been served with the 2009 removal order, and only saw it for the first time on July 26, 2010 -- four days after her granddaughter was taken into foster care.
As a result, she could not defend herself against any of the charges against her in an apparent violation of her constitutional due process rights.
Then it happened again. "I never received written notice of the most important hearing of my life," O'Brien, a Mormon, former model and widow of a prosecutor, said of the Aug. 19 hearing she missed as a result.
Arlington JDR Chief Judge George Varoutsos found her guilty of neglect and abuse in absentia, and suspended her one-hour-per-week visitation with the child she had raised from infancy. The only contact she was allowed was a once-a-week phone call monitored by the foster parents so
Yet just two days later, she says, her granddaughter's court-appointed guardian ad litem allowed the same Montgomery County detective investigating check-kiting charges against her (which have since been dropped) to interrogate her granddaughter until she became hysterical.
Calls to the guardian ad litem, the Arlington commonwealth's attorney's office, and the social worker involved were not returned.
Another anomaly: Morris received two slightly different final court orders, both dated June 6, 2008, and both signed by Judge Esther Wiggins Lyles. (Supported by Guardian ad-Litem Deborah S. Olin)
That same day, court transcripts show, Judge Wiggins Lyles forced a woman who had not been subpoenaed as a witness to testify on the stand without benefit of the legal representation she clearly requested. A federal investigation into such violations of due process rights should be next.
Judgeswield enormous power, but that power is not absolute. They are duty-bound to obey legal rules that protect defendants' constitutional rights. One of those rules is jurisdiction, loosely defined as the court's authority to hear the cases before it. On July 22, Arlington County social workers took a 10-year-old girl away from her 64-year-old grandmother and placed her in foster care based on a Feb. 19, 2009, emergency court order that cited "allegations of neglect" as wellO'Brien would not upset her granddaughter with her "adult" problems.
Dec 14 2010 - 8:05pm
Posted by Artim at Wednesday, December 15, 2010 No comments: