Another Story of Judge Bruce D. White and his non-just treatment 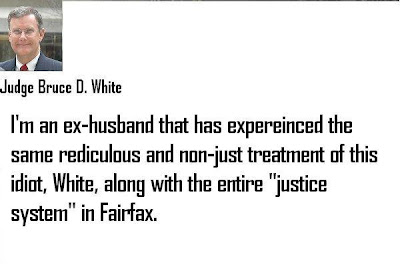 I'm an ex-husband that has expereinced the same rediculous and non-just treatment of this idiot, White, along with the entire "justice system" in Fairfax.

I'm not a mom, I'm an ex-husband that has expereinced the same rediculous and non-just treatment of this idiot, White, along with the entire "justice system" in Fairfax.
To recap briefly, my ex wife, Elizabeth D. Seale, was an appointee in the Bush administration involved at the highest level of faith, family and children departments and organizations.
The divorce case was sealed by Judge Wooldridge and my malpracticeing attorney, Raymond Benzinger, purposely refused to inform me of a deadline to appeal the sealing of the case. He actually shined me on by saying he would get to it. He also refused to obtain my ex's phone records but handed mine over to opposing counsel without delay. My ex-wife had several affiars while she was married priviously to our short marriage, and was having an affair during our short marriage while employed at the federal level for faith, children and family departments which she admitted to in depostions. The case was sealed, by their defense: to protect her political empolyment. No kids, no financial records, just her politicial employment. Recently, someone posted some of the sealed court documents on the internet which exposed the malpractice of Benzinger, and others involved in covering up my ex's facts.
Without ANY proof, I was found guilty of contempt of court and given only 4 days notice of the hearing, (I live in Key West, Florida), and the hearing was in Fairfax, VA.
It appears that White is the latest to fall into lockstep with the cover-up of my ex's facts.

Sincerely,
Posted by Artim at Sunday, November 15, 2009 No comments:

Email ThisBlogThis!Share to TwitterShare to FacebookShare to Pinterest
Labels: Another Story of Judge Bruce D. White and his non-just treatment

The United States Supreme Court case for KING, is a case for ALL children who have been deprived their human rights under the 14th Amendment that requires equal protection and "due process" like all people under the US Constitution.
THIS CASE IS FOR ALL OUR CHILDREN...
THE QUESTIONS ARE FOR ALL MOTHERS, FAMILIES,
CHILDREN WHOSE HUMAN RIGHTS, CIVIL RIGHTS HAVE BEEN VIOLATED BY THE NOT OF RECORD, FAMILY COURTS WHO WORK IN DARKNESS AND ACT MORE LIKE A CARTEL THAN A SYSTEM TO BUILD AND MAINTAIN FAMILIES.
We are asking that you send this brief to as many people as you know who could also pass it on and sign the petition to the Supreme Courtas an organization. Our goal is to get at least 100 organizations to sign the petition... family courts for too long have been their own little island of non-law abiding activities and profits at the expense of OUR children.
This human exploitation needs to stop and we WILL get justice for OUR children and for ourselves.
We will resend all of these illegal orders and our children will be returned and will be provided the physical, psychological and mental support they will need to heal from this "ILL-LEGAL HUMAN CHILD TRAFFICKING."

On June of 2008, Ariana-Leilani – now 6 years old, Daughter of well respected Dr. Ariel King founder of The Ariel Foundation International was legally kidnapped from her loving Mother by the Juvenile & Domestic Relations (JDR) court in Arlington, Virginia - A court ”NOT OF RECORD”.

Since then Dr. King's parental rights including her rights of contact with her then 5 year old daughter were effectively and unjustly terminated.
Dr. King who was the child's primary caregiver up until that point was Forced to be vanished from the life of 5 year old daughter Ariana.
The JDR court entered a series of orders making an appellate
review …………….
The “NOT OF RECORD” JDR court effectively terminated the loving Mother’s parental rights and criminalized her for caring for her daughter.
The denial of constitutional & internationally recognized human rights of the child without substantive review is a denial of Due process & equal protection.
Last week we filed a Petition for Certiorari to the United States Supreme Court. This Petition asks that the problems with the lack of due process in Virginia be addressed, and the child’s rights recognized. This could lead to a landmark decision. Please take a few moments out to read the Petition, we think you will find it informative. Of particular note is the background section of the brief, that clearly lays out the history of the case, and how Dr. King and Ariana-Leilani were denied their rights without due process and equal protection. Existing Supreme Court case law finds a parent-child relationship a fundamental right that is entitled to the same protections as other fundamental rights in the US Constitution. We also believe that the “right to life” interests would find this case of interest because it addresses the rights of the child.
Petition for writ of Certiorari to the Supreme Court of the Commonwealth of Virginia

The key player on these decadent & depraved actions is the famous 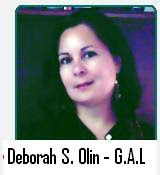 Please read the petition carefuly in order to discover the similarity of the cases which Deborah S. Olin was appointed as the Guardian ad-Litem.
Olin’s standardized tactics are dreadful & outrages.
Posted by Artim at Sunday, November 15, 2009 No comments: